I can’t imagine how you are feeling at the moment as you begin the astoundingly unfair and disproportionate prison sentence that has been handed out to you.

It might cheer you to know that so many people around the world are thinking of you and doing what they can, through Amnesty International and other bodies, to see if your sentence can’t be reduced, commuted or suspended.

It has been a confusing time for me, as I have watched the arguments ebb and flow on Twitter and in the bars and cafés of London. Some feel that what you did was blasphemous (blasphemy has been well described as a victimless crime, but if it is against the law in your country as it was in mine in my lifetime, then some penalty might be expected) and some believe that it was a tasteless, immature and trashy protest for which they can offer no sympathy. I have read your closing statement, Ekaterina, (http://boingboing.net/2012/08/11/pussy-riots- closing-statemen.html and http://nplusonemag.com/pussy-riot-closing- statements) and I know that despite Pussy Riot’s “punk” affect and ethos, which can put some people off, that you are highly intelligent, educated and articulate people who knew exactly what you were doing and had good reason for it. Your argument was not with the religious, or with Christianity, but with Putinist croneyism within the ranks of the Orthodox Church, especially this particular building, the Cathedral of Christ the Saviour. 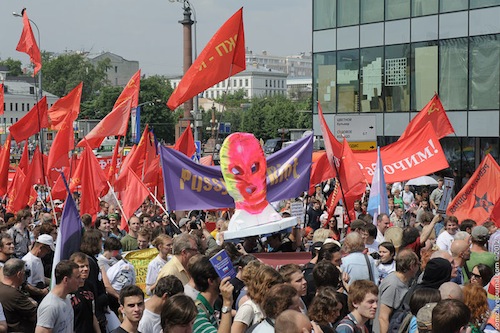 But most sensible people, whether they are Christian or not and even if they are blind or deaf to the statement there for all to read in the links above, can surely see that a long pre-trial period in gaol followed by such a severe sentence which unashamedly announced that it was given not according to strict law, but in order to “send out a message” is not just in any state that claims to be a fair free democracy.

I write this as an unashamed Russophile. I find it so hard to bear that the country of Tchaikovsky is allowing a toxic mixture of shaven-headed nationalists and fundamentalist churchmen to dictate laws on homosexuality for example. Part of your “crime” was to come out on the side of gay rights. It astonishes me how the history of Russia seems to repeat itself. Pushkin was sent into exile by an offended Tsar. Dostoevsky was taken to a firing squad and only reprieved at the last minute before being exiled too. And then in the Communist era, as we all know, artists, writers, intellectuals and liberals of all kinds were under constant threat of exile, forced labour or even execution. Now we seem to be moving towards a similar position. I am not saying, and nor would you claim, that you are the equal of Pushkin or Dostoevsky, but that isn’t the point. The fight is for free speech, and this isn’t limited only to gigantic towering titans of literature.

Some cynics (and believe me, my country is stuffed with them) will ask why I am not writing to those imprisoned in Iran or China. Well, I have the faint, perhaps forlorn, hope, that Russia and its leader might be faintly more persuadable. I know how much he and his followers hate being “lectured” by western liberals, but the fact is I find it impossible to be silent in the face of such monstrous injustice and preposterous tyranny. And that’s the point. Putin hasn’t made a monster of himself. He has made a fool of himself. It is often said that had the world laughed at Hitler early enough he would never have taken the hold on power he did. I do not call Putin a Hitler. Yet. But it is time to laugh him out of this stance and you out of incarceration.

This letter was first sent to Amnesty International for publication on their website.